All of us, as humans, take things for granted. For most of us, our everyday problems fall under the category of ‘first world problems.’ This simply means that in the greater scope of things, they don’t really matter.

For example, when we encounter blind or deaf individuals, our daily struggles with sleep, work and school are minute. Just imagine how much more challenging life would be if you were blind? It was definitely a struggle for this guy, who hadn’t so much as seen the woman who gave birth to him. But then one day, everything changed.

Gene Purdie was just your average guy from Denver. He had a wife and kids, and even a stable job. There was one exception, however: he was blind.

When Purdie was 16, he was diagnosed with a rare disease that left him legally blind. Everything was a blur, and all he could see were vague outlines.

He has Stargadt’s disease, the rapid degeneration of the center of the retina. The part, the macula, is responsible for your focus and straight-ahead vision.

Just imagine meeting the love of your life, and not being able to fully see them. That’s how it was for Purdie, a truly blind date. His wife, Joy, and he, had their first child 10 years after they got married.

Then came in Rachel Ray, the host of a talk show on CBS. Joy had seen an episode of hers involving another individual with Stargodt’s disease. The guest was given eSight glasses that completely restored their vision. Joy didn’t hesitate in reaching out to get Gene on the show, and Ray didn’t hesitate on accepting them.

16 years later, and Purdie was finally given a chance. His nerves were present, yet he masked them perfect… that is, until they presented him with the eSight glasses.

The eSight glasses, invented by a digital eyewear company, are a prized possession for those who suffered with a disease. Their ability to restore vision is almost priceless, costing nearly 15,000 dollars for a single model.

The minute Purdie slipped on those glasses, he completely lost it. Just imagine being able to se everything around after 16 years under the dark. He was astonished by his surroundings, but what captivated him the most was the minute he laid eyes on his wife and kid.

After all these years, he was able to see the woman he married… and he only had two words, two very powerful words, to say to her: “You’re beautiful.” Joy’s heart (as well as all of ours) melted at the statement. It truly was a priceless moment.

See the clip for yourself, if you’re willing to shed a few joyful tears. It’s moment like these that really make us grateful with what we have. The takeaway lesson: don’t take anything for granted and be happy with what you’ve been blessed with. 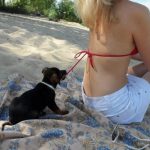